In the second blog about progress on the website we are starting our review of the counties where we have managed to list all the sites from the 1968 Gazetteer of deserted medieval villages and provided a full description.  For these counties (currently Bedfordshire-Essex and the East Riding of Yorkshire), writing a description of the site and evaluating the evidence has also enabled all sites to be classified as deserted settlements, shrunken, shifted or doubtful (see Currently complete counties – Berkshire for more info on the categories). All counties used are the pre-1974 counties.

Bedfordshire is one of those counties for which full descriptions have been possible. There were 18 deserted sites recorded in the county in the 1968 Gazetteer. Now on the Bedfordshire Historic Environment Record there are over 200 sites classified as deserted settlements. There has been little wholesale investigation of the deserted settlements of Bedfordshire but a number of projects have been invaluable in our understanding, not just of medieval Bedfordshire but also of medieval settlement in general: the research project looking at settlement development in the East Midlands (Lewis et al. 2001); and the excavations at the deserted site of Stratton.

In their study of the East Midlands, Lewis, Mitchell-Fox and Dyer (2001: 57-58) divide Bedfordshire into three zones. In the claylands to the north of Bedford there is a zone of dispersal with forms of settlement including interrupted rows and isolated farmsteads. In the south of the county more variety is present with small clusters, polyfocal settlements, short regular rows, interrupted rows, and numerous isolated farmsteads with occasional areas of nucleations. In the north-west of the county the pattern is dominated by nucleated settlement. This shows the diversity of the settlements of Bedfordshire into which the pattern of desertion fits.

Of the 18 settlements in the 1968 Gazetteer, eight have remained classed as deserted medieval villages, with two being classified as deserted medieval hamlets, three as shrunken settlements, one as a shifted settlement and four as doubtful. One of these doubtful sites, Etonbury, would appear to be an manorial centre with no substantial settlement associated with it and does not appear in any of the medieval taxations. The other three settlements, Sudbury, Kinwick and Cudessane are all found in the Domesday Book but have disappeared by later taxations and are not fully located.

From the settlements listed there are a number of interesting stories including that at Cainhoe where desertion takes place in the mid-fourteenth century and in 1375 it is noted that ten cottages have been empty ‘since the pestilence’ suggesting a settlement struggling to recover after the Black Death (Beresford and St Joseph 1979).

It is hoped in the future that the website will be able to review all the evidence uncovered since 1968 and provide a fuller picture of deserted settlement in Bedfordshire.

The Beresford’s Lost Villages website is still a work in progress. So far we have concentrated on getting a record for all 2,263 sites listed in Deserted Medieval Villages published in 1971 to appear on the website. A skeleton record for all these sites has been possible. The grid references used to locate the sites are those published in 1971. In some cases this has been shown to be incorrect – often simple typos of wrong map sheets or reversed numbers. These have been corrected where it has been spotted. When we look at each site in-depth then the grid reference is reviewed to check it matches with the physical evidence or historical data. One some occasions this means the grid reference is refined – and this is noted in the description of the site.

These full records with descriptions have been possible for a number of counties – so far pre-1974 counties of Berkshire-Essex as well as the East Riding of Yorkshire. Gloucestershire is currently under review. The next few blogs will review these counties – starting with Berkshire.

In 1954 seven deserted villages were identified by Maurice Beresford in Berkshire (Beresford 1954).  In 1962 the first attempt at constructing a county-wide list produced 36 sites (Beresford and Hurst 1962). All of the sites listed in 1962 appear on the 1968 Gazetteer (published in 1971) by which time the list of sites in the county had risen to 43. On the Beresford’s Lost Villages website Berkshire is the one county we have manage to update since the 1968. It is our future hope for the website that all counties can be updated to reflect our current knowledge.

The total number of sites in Berkshire now listed is 123, an increase of 79, with one of those originally listed now classed as two separate records (Betterton). These additions have been identified from local research, records on the National Monuments Record and local Historic Environments Record as well as other sources such as the research of John Brooks (1982). Of course this does not preclude settlements that have yet to be identified and the project has not undertaken a full analysis of every individual record in the county. If people do know of other sites, please contact the project.

Every settlement listed on the website is classified into one of six categories: Deserted Medieval Village, Deserted Medieval Hamlet, Shrunken, Shifted, Migrated or Doubtful. This refines the data and allows sites that may well not be indicative of deserted settlement to be classed as doubtful.

Deserted Medieval Villages – those settlements that show clear evidence of a population concentration that was present during the medieval period, but has since been totally depopulated. There may be a modern farmstead on the site, or a new settlement may have re-grown at a much later date.

Deserted Medieval Hamlet – a settlement that was present in the medieval period and shows clear evidence of depopulation. However such a settlement was never large in size. There is of course a wide variety of settlement types across the country, but it was felt there needed to be some distinction to indicate much smaller settlements.

Migrated/shifted – a settlement that has moved location, whether that be by one sudden action (migrated) or through gradual processes (shifted).

Doubtful – this category includes entries where it is doubtful that there is any evidence of a deserted settlement. This may be due to three different factors: there may be no convincing evidence of any settlement either archaeological or historical; there may be no evidence a settlement was occupied in the medieval period; finally there is evidence for medieval occupation, but it is not convincing that the settlement deserved to be classed as a village or hamlet, being more likely to be just a farmstead.

For Berkshire in total, of the 123 sites, 50 are classed as deserted medieval villages (40.65%), 8 are classed as deserted medieval hamlets (6.5%), 30 show evidence of shrunken settlement (30%), three indicate shifted settlement (2.44%) and five are migrated settlements (4.07%). Finally 27 settlements on this list have been classified as doubtful (21.95%). Since the publication of the 1968 Gazetteer an additional 14 sites have now been classified as DMVs, but the majority of the recent additions to the list have been the smaller settlements, shrunken and a greater number of doubtful settlements. This reflects the developments in the study of deserted settlement in general where more attention has been paid to areas of shrinkage as well as smaller settlements.

For further information on the sites in Berkshire look at the website – notable sites include Seacourt – where excavations have revealed evidence of the buildings.

Welcome to a blog attached to the Beresford’s Lost Villages website developed at the University of Hull. The first launch of this website occurred in April 2014 but it is very much a work in progress. This blog will update on progress and mention notable deserted sites. Below is an outline of the website and its development. The website is dedicated to the study of Deserted Medieval Settlements. It has been made possible by a generous legacy bequeathed to the University of Hull by Professor Maurice Beresford. The first launch of the website concentrated on those settlements identified as being deserted in the seminal publication of 1971, edited by Maurice Beresford and John Hurst entitled ‘Deserted Medieval Villages’. This produced a consolidated list of what were then classed as Deserted Medieval Villages (DMV) in 1968, 2,263 in total. 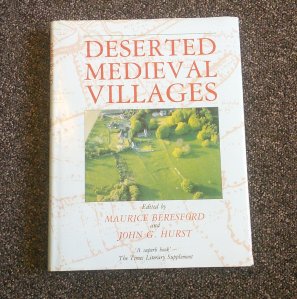 These sites are villages which appear in documentary sources such as the Domesday Book, medieval tax records and maps, but have since seen a dramatic decline in population to the extent that at some point they have been classed as deserted. The reasons for this desertion are varied, whether from land exhaustion, coastal erosion, a change in land use or the whim of wealthy landowners.  Each of the settlements listed as known in 1968 has an individual page on the website which explores a range of datasets for the settlement. In the near future it is hoped that all these sites will also contain a description of the site and links to further sources. For the time being this is only possible for a few counties. When we started the project we set our sights high and hoped to add to the 1968 list. In the preface to this gazetteer it is clear that this was a work in progress – some counties had already been subject to detailed research, for others none had taken place. The publication lists 16 counties where considerable research needed to be carried out: Cheshire, Cornwall, Cumberland, Devonshire, Durham, Essex, Herefordshire, Lancashire, Middlesex, Shropshire, Somerset, Suffolk, Surrey, Westmorland and Worcestershire. Of course in the intervening years many scholars have rallied to this call and many more settlements have been added to this list. Early on into this project it became clear that if we were to attempt an update of the county-based lists, we would not be able to publish full entries for more than a few counties. So the initial part of the project focussed on Bedfordshire and Berkshire (the first two counties alphabetically), and the East Riding of Yorkshire, the home to the project. At the end of this initial phase (2010), we had a structure for the database constructed and the beginnings of updated lists – but only for Berkshire did we feel that every attempt to supplement the 1968 list had been attempted. We also had the framework for the website built.

In 2013 a strategic decision had to be taken. If we were to continue on attempting to update all the county lists, and provide full data, we would not manage to get many more than four counties completed for the money available to the project. What we decided would be possible was to get a ‘skeleton’ data set for all the 2,263 sites from the 1968 Gazetteer completed. This would allow the website to be launched – with a country-wide data set, and with valuable information, while gradually updating as and when we could. This ‘skeleton’ data set would include location information, the basic documentary sources, as well as the information on other records such as the record numbers in the National Monuments Record and the local Historic Environments Record. We would also be able to complete the entries for a small number of counties. These complete village records would also require a full description, information on investigations that have taken place at the site, photographic and cartographic records, the period or date of desertion and a classification of the site – whether deserted, shrunken, shifted, migrated or in fact whether it was doubtful.

Progress as of 31st October 2014 Currently you can access the following sets of data via the website. As more detailed material is added, updates will be posted here.

Department of History
University of Hull